On Saturday, the tree surgeon came and felled the heron’s sycamore. He was a young man with hair as red as it comes and a very handsome smile. Did it make the fall easier ? My husband is still feeling hurt and guilty we had to bring it down.

Today, as night was creeping in, I took Acer palmatum Katsura out of the pot it has been sitting in for at least three years. The roots had escaped through the draining hole and into the soil.

The plan was to trim the roots and repot in a bigger container, a beautiful green-glazed one which used to house Acer palmatum Osakazuki. Indeed, this evening, I had as many good reasons to keep this little maple potted as I had to do the same to his bigger cousin a few years ago – above all, the lack of a worthy planting space in the garden and the lingering thought that if (or rather when) we have to move, it will just be much easier with the maples already sort of packed. No, a Japanese maple is not the kind of plant you plump anywhere. Yet, this evening as a few years ago, I could not keep a tree contained. So I released it. Anywhere, almost, between the box and a self-seeded hypericum, and unwisely near the wisteria which will be sucking quite a lot of water away. 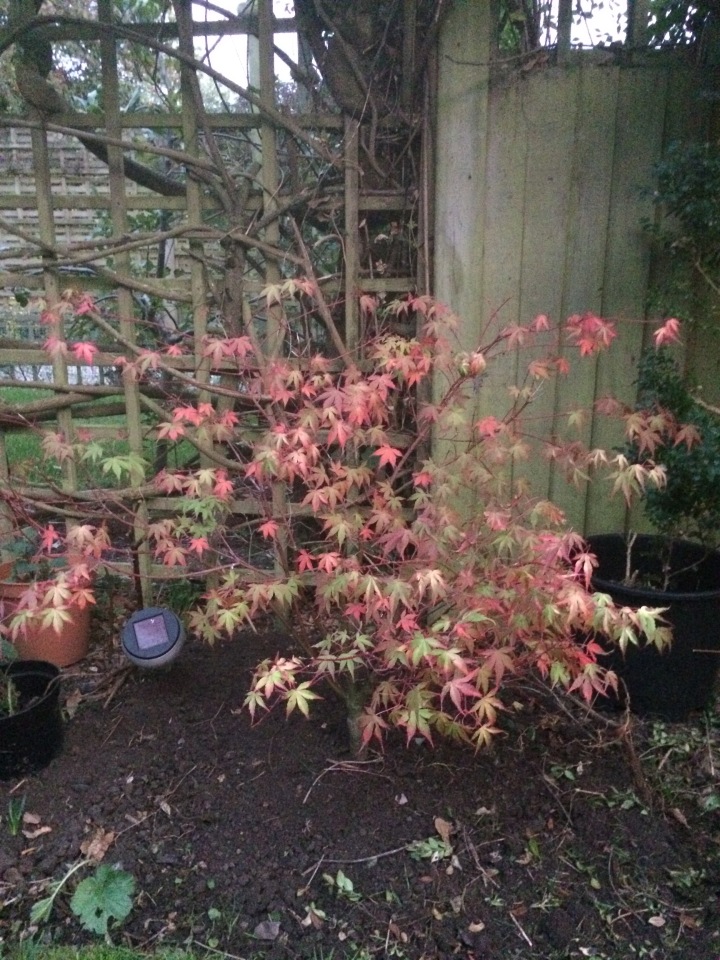 You will think me foolish. With any plant, except for bulbs and maybe box, I struggle with containers. As soon as I receive a plant, I feel, if not an urge, at least the need to give it to the earth. And when it is a tree, even as slow growing as this Japanese maple…

Planting a tree in the earth is like freeing a bird. Roots belong to the mysterious world of unconfined depths as wings to the sky. We walk the roads that draw their interface, unsure where we belong as yearning pushes and pulls our hearts along the way – farther.

10 thoughts on “Releasing a maple”