The exceptional weather explains how little I blogged about gardening, in spite of a wild and unrequested desire to share everything that grows on my small plot – I was too busy outside, enjoying each day of sun as if it was to be the last. I can’t say I remember such a sunny and warm Spring in Canterbury.

In May, my in-laws came down to visit and took me to Goodnestone Park, where Jane Austen, my mother-in-law’s favourite writer, spent some time. 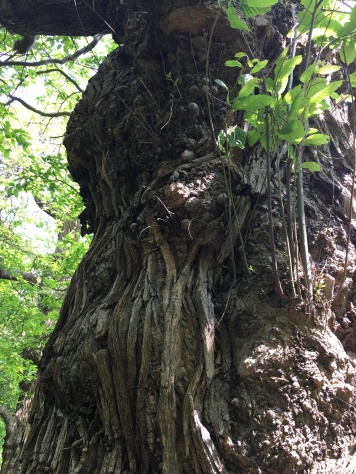 The walled garden’s glorious wisteria was still in bloom, as were some beautiful tree paeonies. 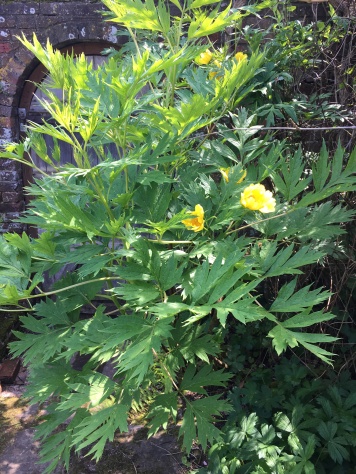 Numerous other paeonies were about to burst open – one week later and we would have been walking in a Chinese painter’s dream. Nevertheless, as always, it is the arboretum I loved the most. Visiting the Park on a weekday, we were almost alone walking the woodland paths where rhododendrons and azaleas were still in flower. 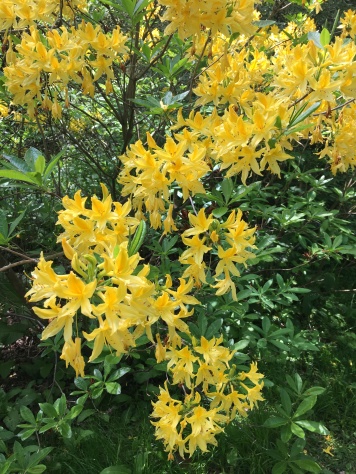 I had never seen an enkianthus before. 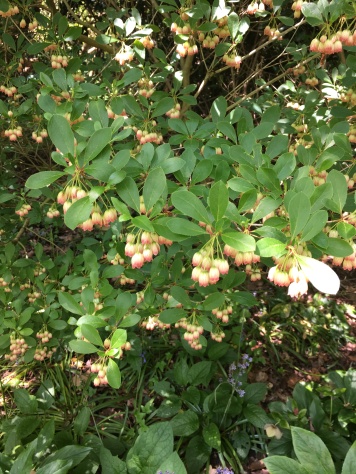 We disturbed the head gardener, Paul, for a long chat (or a series of questions by my father-in-law). As we left him, I couldn’t help seeing he had plants to sell… and me, not enough cash in my purse. Paul was amazing and was ready to let me take a plant away for what little money I had, but then my mother-in-law offered to pay. That is how I went home with a Phlomis russeliana, an unnamed echinacea and an equally unknown rudbeckia (will have to wait for flowers to guess a bit more). To house them, I had to move plants around again, as usual. A pic of the phlomis, behind the alchemilla. 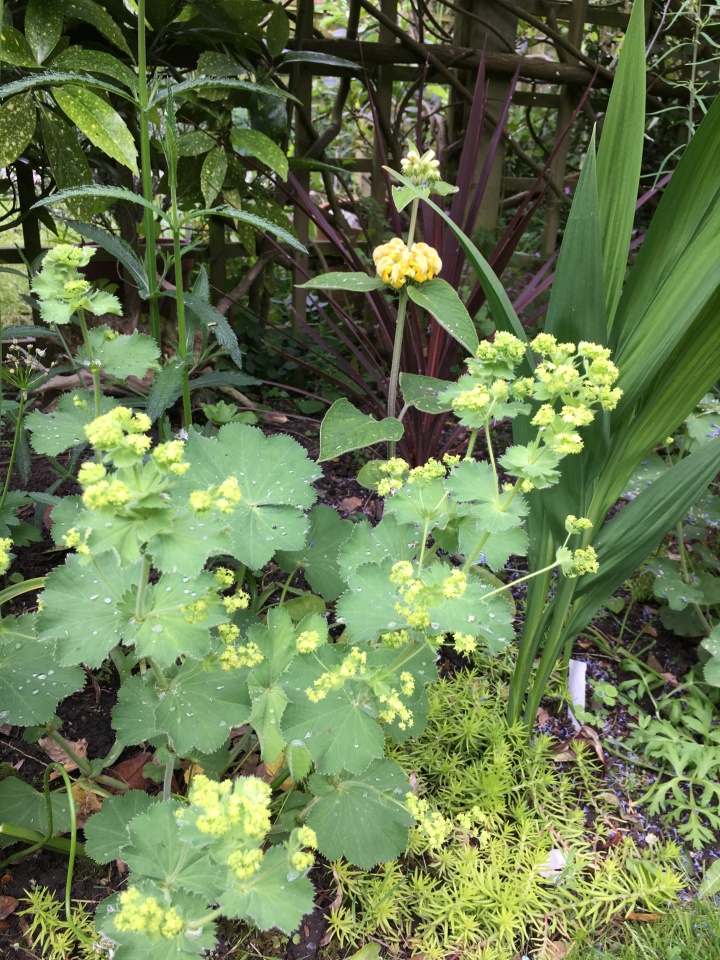 And then came the tadpoles.

A little pond project had been in my mind for a few months, but there was nothing planned. I contented myself with bothering people with my desire for a small pond (or rather a big one but as I only own a small garden…). My sister-in-law, in York, has built a small and attractive water feature in her own garden and, though I lack her keen artist’s eye for proportions and beauty, I thought I could try something similar. Later, that was. In a few months. When I’d have time. Until my husband and kids came in one evening through the garden gate… with a box full of tadpoles they had rescued from a pond which was drying out.

The tadpoles in the pond a few weeks before the disaster. Don’t they look like mice ?

We weren’t the only ones to have noticed how dangerously low the water level had fallen, and on the day my kids collected the tadpoles, many other concerned citizens were manoeuvering big buckets, trying to do their bit – what was left of the pond looked like a simmering soup, with hundreds or thousands of panicked creatures wriggling. By luck, our water butt bought in November and forgotten near the bike box had recently been installed, thus providing some rain water for the bucket in which we housed the tadpoles, for want of anything better. Followed a frantic search on various websites, evenings with the tape measure in different corners of my garden, scratching my head, and boiled spinach scattered on the surface of the water. One preformed pond liner was purchased, followed by a change of heart and a bigger one (pond liner, not heart). Having found a froglet dead in the bucket (and eaten by the others), and another one which had managed to get out climbing on a stick we’d put in the bucket to that effect, we decided to move the tadpoles into the smaller pond liner whilst waiting for the better one to arrive. Alas, as the liner wasn’t held by any soil, one side collapsed under the weight of the water, and the tadpoles had to be rescued again. I spent two days praying the desired liner would be delivered quickly.

It came. We dug, even the neighbour who wanted a bit of fun. To make space, a nice choisiya and a dwarf cypress were sacrificed (the choisiya was rehoused in a pot, but I am not sure it will make it, so hard was the pruning). I’ll spare you the details, but suffice to say that, next time, I will buy a simple butyl liner and dig the shape I want. The tadpoles moved in and looked happy. I threw some ivy leaves in to provide a bit of shelter, whilst waiting for the delivery of aquatic plants (again, I ordered too many, considering the size of our pond, but what can I do…).

Meanwhile, I surrounded the pond with plants from elsewhere in the garden, then added astilbe Ellie and a little maple (the good old Acer palmatum dissectum Garnet). 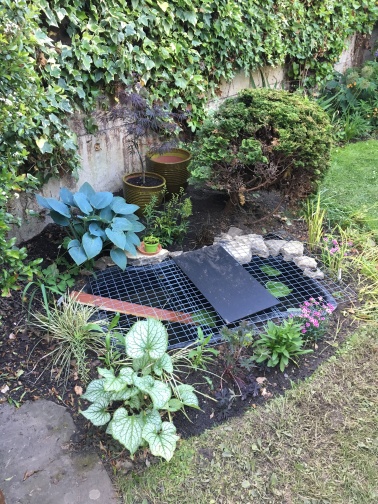 I am aware the purple dianthus, the shasta daisy and the dark-leaved geranium placed at the front mightn’t belong there or together, but I struggle with any bare bit of good soil and am happy trying. As for the very aesthetic stuff on top of the pond in the last picture, it will stay until the aquatic plants can provide cover – we have quite a lot of birds and notably blackbirds in the garden, and I hear they are partial to a bit of amphibian food (I don’t blame them, I am French after all, but hey, I am providing bird food).

So, I know the bits of concrete are not ideal (not to mention the fact that in the second picture, they look a lot like bad teeth), but I could say they were very locally sourced as they came out during the digging process. Ideally, it would be more natural to let the grass come to the edge of the pond, but again, I have no turf available, and I need my bit of planting. The water level should be higher, and I am hoping for some rain which the weather forecast keeps denying us in East Kent. All I want now is some happy frogs. 🙂

10 thoughts on “Jane, Paul and the tadpoles”