Walking one morning on the Holcombe moors under a bright Spring sun. Distances are vanishing into a gleaming haze and on the banks bloom the first coltsfoot flowers. 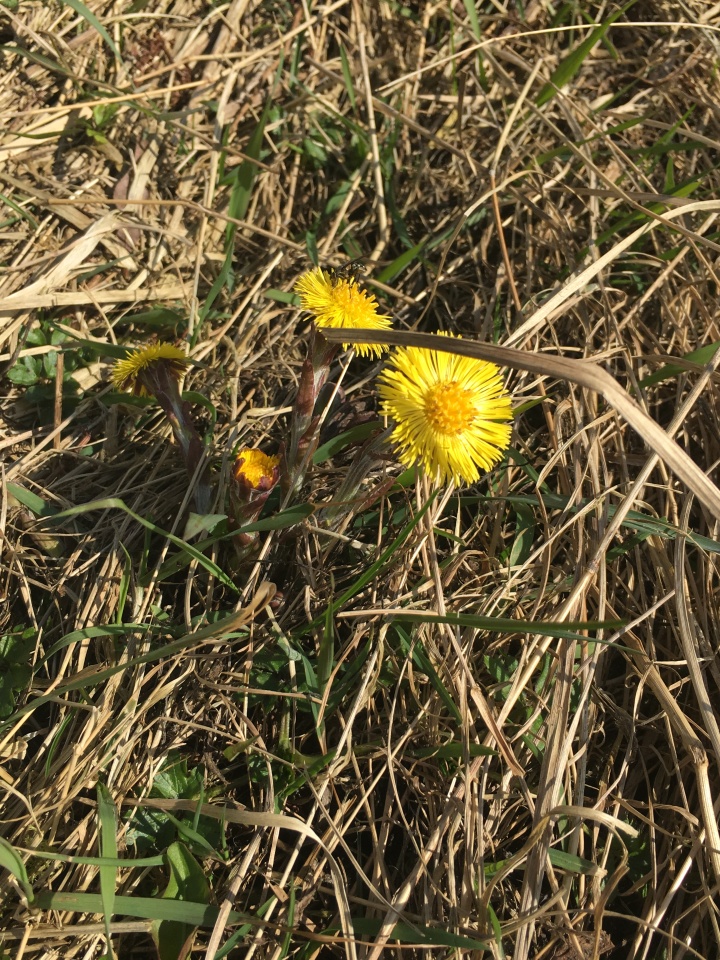 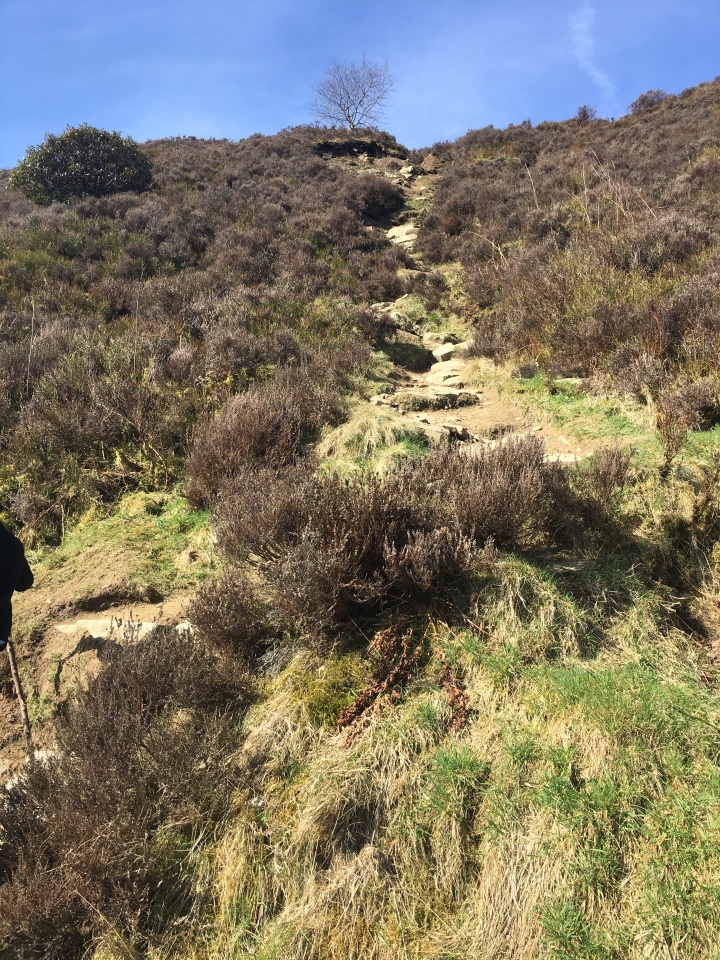 Lancashire moors, Southern Alps, worlds apart ? Not to me. I walk, grateful for the benevolent pressure of gravity, and my whole being is but a smile. The hilltop is a sea of blond manes, vibrating with the skylarks’ song, and we ride to the frontier whence the clouds rise.

For the skylarks I am immensely grateful. I love The Lark Ascending, but have never actually seen one, let alone a hill full of them. I follow many as they aim to pierce heavens, and fall. At one point, I see one disappear into the blue, as I was told they do, sometimes, mysteriously. I stand transfixed under the empty sky where its song still resonates. Then comes a familiar pull, inside, a need to put words on this happiness.

This is L’s home, the hills of his childhood. At their foot lies his hometown. It is a small Northern ex-industrial settlement which, at first sight, any visitor would find dreary, to say the least. I still wonder how his first girlfriend, a girl expelled from the Tuscan paradise of Arezzo, survived the aesthetic (as well as climatic and cultural) shock. As for him, who had no other home to escape to, he found salvation through an interest in local history. Researching the archives to write the story of his region and try to salvage the remnants of the Industrial Revolution heritage from the shortsightedness of local councils infinitely broadened the possibilities of what first seemed to be on offer. On those soot-dark mill town walls, a wealth of echoes started to resonate, windows opened onto a richly animated world. Under its veil of rain, the landscape began whispering, speaking, singing. History wasn’t that merely useful source of valuable lessons it is so often sold as, but a meeting place and a condition of happiness. In L’s case, there was a deliberate attempt to draw from the powers of memory (his own and that of others) in order to defeat the poverty of his experience. For me too, happiness and memory are intrinsically intertwined, but in a different way.

My mind’s memory is very poor, and not improving. Of concepts and ideas I find myself quite deprived. Of cultural references – facts, dates, names, stories, those bricks needed to build a decent system of thoughts –, I have to admit to being less endowed than any person of a similar level of education should be. Why, I can’t even remember events in my own life, and those I can recall, I am often unable to order chronologically, even approximately. Yet it is memory that heals me and makes me happy. I hesitate to use the word “heal”, as I can’t pretend to have ever been torn apart by any particular event – but I was born and long lived under the star of an intense and unfathomable sadness.

Early in my life – before the age of ten – I waged war against time, in which my youth could only see a dispossessing monster, by trying to remember everything. That such a doomed pursuit could only lead to deeper sadness didn’t stop me from trying with all I had. It may have developed my writing skills but it was exhausting. It was bitter. On the edge of adulthood, stubborn though I was, I simply had to let go. Having yielded to the healthy necessity to forget, I survived. Yet, memory undoubtedly is at the heart of any happiness I experience now. Not the overburdened and then discarded storage system of my childhood, but a different form of memory. One through which, though unable to summon facts and dates, I experience what I would tentatively describe as volume, depth and thickness of sensation. A perception of complexity rooted less in the mind than in the body.

The frontier between the physical world – reality, as some would call it – and its spiritual body, is fading. There are layers in the light and layers in the present. I can perceive them. It is nothing new, but time, and gardening, have sharpened my consciousness of it, and extended the depth to which I can perceive. I can feel the continuous presence of what a restricted linear conception of time would have us believe are different instances, all of which supposedly dead but one, which is fleeting, and now gone. Oh, but things remain ! To describe that, French words come to me: concomitance, rémanence.

No effort of the mind is required. It is simply there: the radiance of a form of consciousness which appears in the likeness of a physical sensation, for it is rooted in the body and its memory. And so, years passing, I find myself increasingly relying on unconscious or barely conscious movements seated in my flesh to feel, of course, but also learn, remember, write. All that might not deserve to be called “thinking”, but it makes me happier. More learned people might say I am merely trying to describe something which psychoanalysts and explorers of the subconscious are familiar with. To me, it is a spiritual experience.

The feeling of incompleteness, of hollowness, we are told, is a distinctive part of the human condition. With conscience comes the sharp bite of loneliness. Yet… Try to walk in life as you would up a sunny mountain side, opening your senses, widening your conscience, sharpening your awareness: more is present than first appears. Feel how the densified air holds and defines your body, your mood, through pleasure and pain, how manifold the world, how it embraces you, abrades you, how its manifestations become signs, and marvel at your soul revealed. Is there really such a thing as loneliness ? It is love I feel. And if I get the chance to answer to its call, to share a few words, even to the passing wind, then this life is worthwhile indeed.

Behold
On the hilltops, skylarks
Shrill as light’s beating heart
Shooting up in the blue
Till all is song

23 thoughts on “Notes on skylarks, memory and happiness”