My sister and my cousin are born in May. In France, it’s lovely month which starts with offerings of lilies of the valley, followed by lots of bank holidays. Here, I haven’t managed to grow the fragrant flowers, and the weather is changeable to say the least, but I still enjoy the slow swelling of Summer around me.

I will never tire of my neighbour Susan’s wisteria. It smells like heaven. I feel so lucky to be able to enjoy it ! 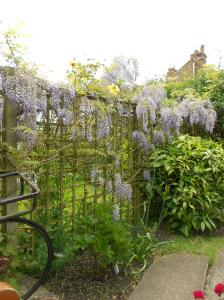 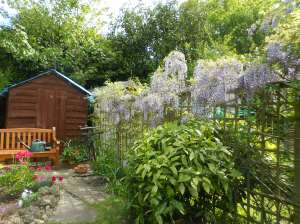 The ranunculas are at their best now. 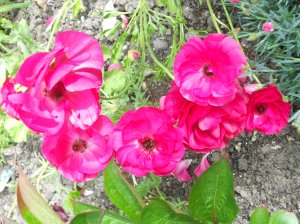 I am also happy with the Flaming Parrots, although I feel slightly ill-at-ease with tulips, which are supposed to be good for one or two years only. It doesn’t seem right to have to throw away bulbs and buy new ones every year or two. (But yes, they are worth it…)

Miss Iris about to shed her green coat and reveal her ball dress : 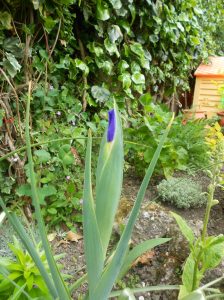 Moving hosta June and Clifford’s Stingray (I love them more and more as time passes) :

On to new plants :

Pulmonaria High Contrast (which arrived in not so good a state) :

Pulmonaria Pink Haze which arrived in a very sorry state. I could have sent it back to Plantify but couldn’t be bothered. I also like to give plants a chance. Last year, I was very happy with Plantify deliveries. This time, the plants arrived several days after the date, which may explain why they weren’t as happy as they should have been. 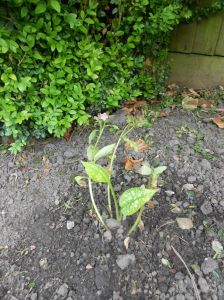 Euphorbia Myrsinites in a slightly better condition than the Pulmonarias (I like how it looks more like an animal than a plant. Its scale-like leaves echo those of my Hebe) :

This Aeonium isn’t a new plant. It spent the winter inside in a reasonable mood, was then sent outside in full sun on a whim, did not like that at all (leaves turned black), came back inside, and is now trying some fresh air again (but not in full sun). 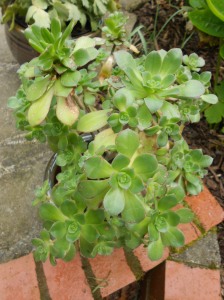 Yoshiki’s dwarf rhododendron, not flowering, but growing. I don’t know what to do with him. I dug a big hole and put a whole bag of ericaceous compost in it, but I am not sure it will be enough. And if it was in a container, which would allow me to control the acidity of the soil, I would have to water it more with our tap water, which is so hard it’s almost solid.

And all that in this stamp-size garden ! 🙂 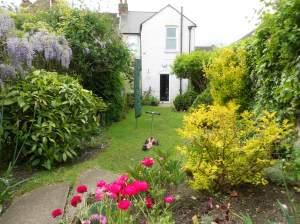 P.S. : Forgot to say we now have two crab spiders ! 🙂 One is very fat and currently sucking the life out of a bumble bee on a choisya flower, and the other is waiting for its meal on a chive flower (probably conscious of the fact that the colour match isn’t so good, it’s lurking on the underside of the flower. Clever !).

One thought on “Beginning of May”