Well, it’s raining today down here, but that won’t dampen my mood. After all, things are moving fast in the garden !

Last week, we were delighted to find a new resident in our garden, a little but fierce crab spider stationed on one daffodil. 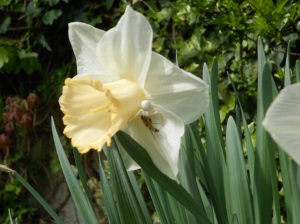 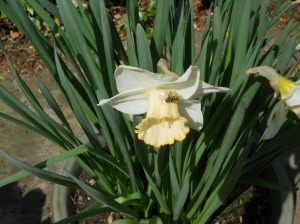 I am told they can change colour and are common in Southern England, but it’s the first time I see one ! They are beautiful and I love how they command respect in spite of their small size. It’s the way they hold their legs, as if they were ready to spring on you at first sign, and their translucent greenish white body.

By now, the daff has wilted and its resident moved away, but other less welcomed guests have arrived – the horrid aphids (yuck !). I had read that they can spread something called Black Death on hellebores, so as soon as I saw black spots on the leaves, I started spraying insecticide. I know. It is stupid, firstly because the black spots are most probably the fungal disease, secondly because you can’t really control aphids, thirdly because it’s nasty. Anyway. Made me feel better, which I suspect is often the real reason for spraying nasty products on plants (placebo etc). Tending to the garden is obviously a way of tending to oneself, at least for some people…

Other victims (I hope) of intempestive spraying were some lily beetles. I found them active on the lilies, logically, but also on fritillaries. Do NOT touch my fritillaries !

I have found a number of fat caterpillars / grubs of some sort. I have tried to use the Internet to identify them, but I would need a lot more knowledge and experience to achieve that. I have left most of them in peace.

It’s only April, but I bump on lots of tiny flower buds everywhere ! The newly purchased foxglove is preparing one, 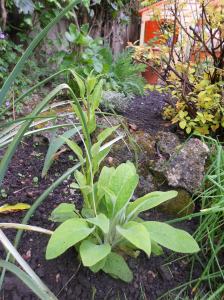 so are the Astilbe, 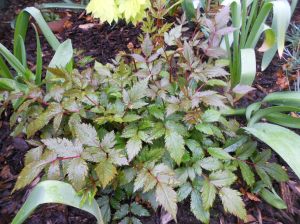 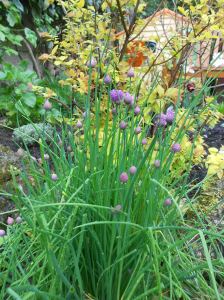 the poor Spiraea which is still trying to regain its fullness after a tidy-up pruning session, 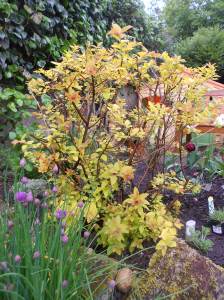 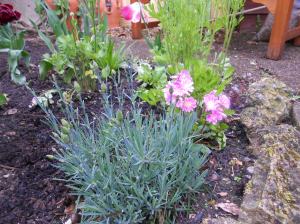 one of the Delphiniums, 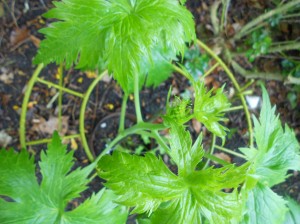 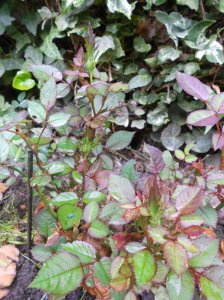 Of course, the alliums are fattening their buds (except the Schubertii, no sign of flower yet, though I am really looking forward to seeing them, they look amazing on other people’s pictures). I already posted a picture of my unique (alas) paeony bud (the other plant hasn’t produced any, but then, it was buried under the cosmos forest last summer… Can’t win every time…).

Apart from buds, I also have some flowers, amongst which I can show : 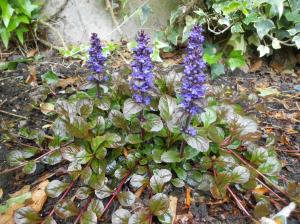 – Lewisia Cotyledon Sunset (the flowers are remarquably bigger than last year, I suppose it shows a good “establishment”) 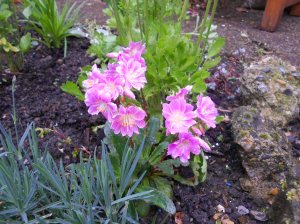 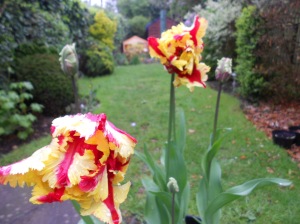 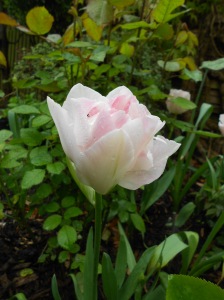 – Brunnera Jack Frost still going strong, which you have already seen not long ago. 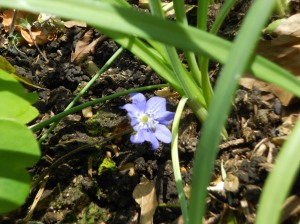 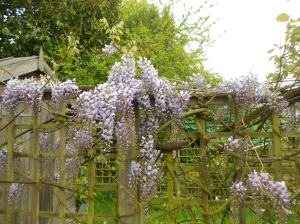 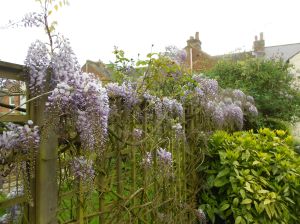 These are for me this year, do you hear me Blackbirdie ? 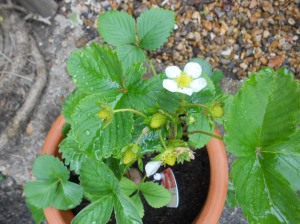 Big disappointment with the Eryngium Blue Star and Eryngium Zabelii Donard which I purchased as bare root things last autumn : no sign of them, neither above nor under the ground. I was counting on them for the design of my sunny patch, boohoohoo. Anyway, I used the space to sow Cosmos Gazebo white (again, but they are my favourite flowers), and Sweet Sultan. And it didn’t stop me from ordering some plants from the same company again (J. Parker’s) as they are cheap, but if this order isn’t more successful, I’ll give up on them. I have recently discovered a lot of bad reviews about that company, but I find it a bit too easy to complain for anything on the web, and one doesn’t always get a balanced picture.

I am waiting for another order from Plantify which should have arrived two days ago. The plants I have received from them so far (all potted, no bare roots) have been excellent. I hope these (a pulsatilla, two pulmonarias, Euphorbia myrsinites and some lupins) will be as good. Will post pictures when there is something to photograph. 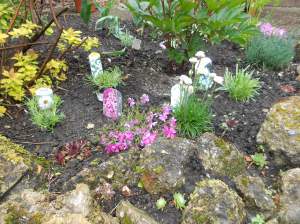 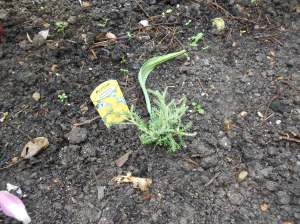 Love them ! They remind me of the gorgeous wild flowers we saw last summer in the Alps.

How I love little surprises ! These little chaps weren’t supposed to be here as I tried to get rid of them last autumn : 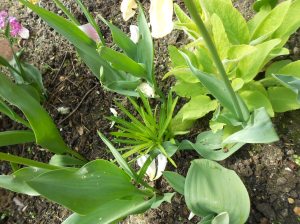 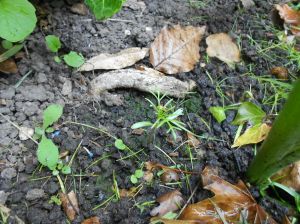 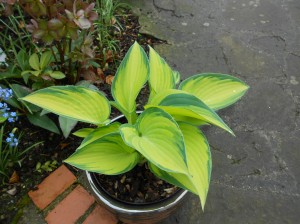 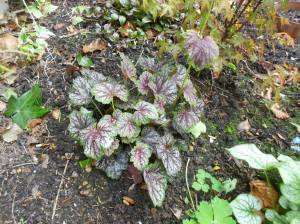 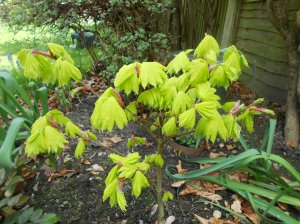 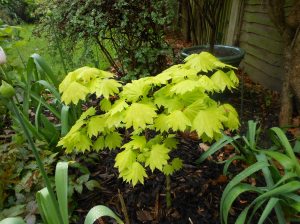 How did I live all these years without a garden ?