How time flies. Son is now going to school, which mainly consists for the moment in playing with Legos / trains / puzzles / cars. Daughter is bossing everybody around, even without using any recognisable words. I try not to imagine what it will be when she is older, as I already feel totally defeated.

I look at the holiday pictures, the peaks, the glaciers, the sky, and I wonder how it is that people can live far from mountains, just like I do presently. It’s not just their beauty. It’s the awe, the wonder, the power of revelation – that feeling that you wake to realise what your nature is, glorious and insignificant at the same time. How your heart swells with peace and strength. 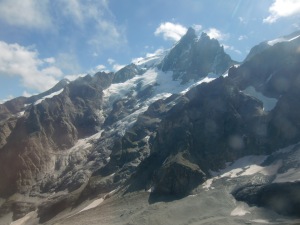 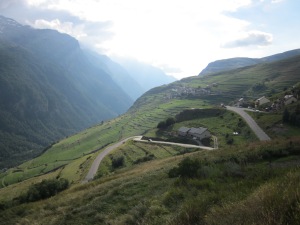 When I came back, instead of following my habit of walking around in my house looking for reasons to feel miserable (why is the house disgusting, etc), I just ran out into the garden. And this is what struck me first : 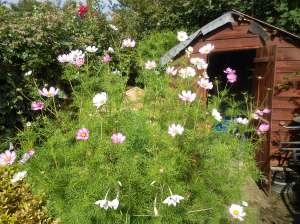 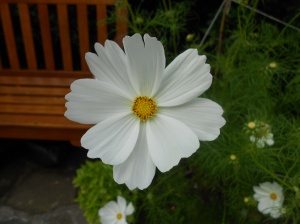 I know I have been going on about how much I love cosmos and Sakura and Ino, etc. But this is far better than I hoped (and, to be honest, a little too big – the peony is now buried under this forest and doesn’t get any sun…). My father-in-law says he has never seen cosmos as tall as these. It is official, I have green fingers (nobody needs to know my father-in-law improved the soil considerably last Autumn with manure and all that). And, on top of that, these flowers are covered in bees. Que demande le peuple?

Well le peuple wanted more stuff. So I got some big pots for the Japanese maples which will need repotting soon, plus some Alpine plants (Aeonium, Delosperma and Ajuga) and lots of Spring bulbs : snowdrops because husband gets emotional about them, tulips which will go in a container this year (no more totally silly-looking salad in the middle of the flower bed for weeks on end), and different sorts of alliums (I have fallen in love with them – not only do they look spectacular, they don’t seem to tempt snails and slugs, alleluia) and hyacinths (again, for my husband). Oh, and more snake-head fritillaries, because I absolutely love them.

Walking in the high-street the other day, feeling nostalgic for the mountains, I came across a stall where people from L’Arche sold plants. There they were, the sempervivum that I wanted to bring back from the Alps so much. Being impatient, I just got two trays and planted them directly into my clay soil without adding grit or sand. So we’ll see if any survives. I think they will. After all, this is Kent, not Lancashire, so why not. Will post pictures of the new plants when the sun deigns to show his face around here.

Apart from that, covered myseld in manure the other day and no, two 60L bags are nowhere near enough, even for a very small garden with only 3 flower beds and a tiny border (if you follow the advice to put a layer of at least 5 cm on your soil). Well I’ve learned something this week !

2 thoughts on “Success with the Cosmos.”